52 Week Autobiography Through Music from Pancycle on Vimeo.

This week I am reflecting on the Allman Brothers, another of the bands I remember hearing when I was quite young, and the southern rock genre of which they were arguably the fathers. The album my parents had was Brothers and Sisters. I am not sure how this album came into our home, my guess is that it was a gift to my parents from my uncle Tim but I could be wrong. I will refer frequently to Tim throughout the course of this project as he is responsible not only for turning my parents and later me on to a ton of music but also for encouraging in me a deep curiosity that led me to my own path of discovery. In doing some research for this episode I also was reminded of how much I was and still am interested in the histories and influences of the bands I listen to and the connections between them. This is something else I get from Tim. I love hearing for instance that Dwayne Allman was into John Coltrane and tried to get Tom Dowd, who had produced Coltrane records to produce the first Allman’s record and that the Allman Brothers opened for The Velvet Underground in 1969 an unusual and interesting combination to say the least.

Having this kind of historical context has always made the experience of listening to music all the more rich. Liner notes of Albums used to be one primary source for knowledge about artists and It is an interesting side effect of the age of music streaming that this type of information is lacking despite instant access to information via the internet. Now one has to do a search to find out who plays in the band, who recorded the record and where etc. instead of that information being packaged with the album.

In any case the Allman Brothers definitely opened a door for me. I wonder if I would have ever had an appreciation for the southern rock genre without having heard this record when I was 5 and later having Tim play “Live at the Filmore East” for me in my grandmother’s living room in derby KS on a stereo that looked much more like a piece of furniture than a music player... 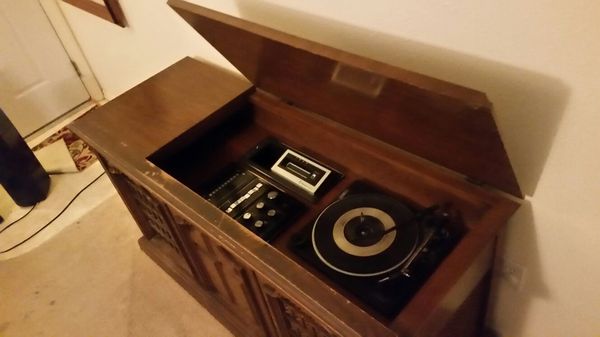 Not my grandmother's stereo but one quite like it!