A 52 Week Autobiography Through Music Week 18 – Roxy Music from Pancycle on Vimeo.

This week’s post features another cameo, this time by my uncle Tim who is a major influence on me musically and introduced me to some of the music that most influenced me in my life. This video is a little bit longer but it’s just because there was so much to talk about it I found it difficult to edit down. Tim is the person who introduced me to the idea of researching who played on the records, who produced the records, when they were released and what relationships the members of the band may have had with other bands. Having all this information made it easy to cross-reference bands and to discover new music just by making links from one group to another. When I would go to record stores and see “produced by Brian Eno” on the back of the record I would buy the record without hesitation simply knowing that it was unlikely that Eno would involve himself in a project that didn’t have some musical validity.

I became quite a Roxy Music fan as and as I mentioned the video at a certain point I owned all of the available Roxy music records and in some cases two copies. The reason for this was that at least the album Country Life had its cover censored so that the one I bought new in the store was just a picture of a plant when of course the original cover features two women who are scantily clothed at best. 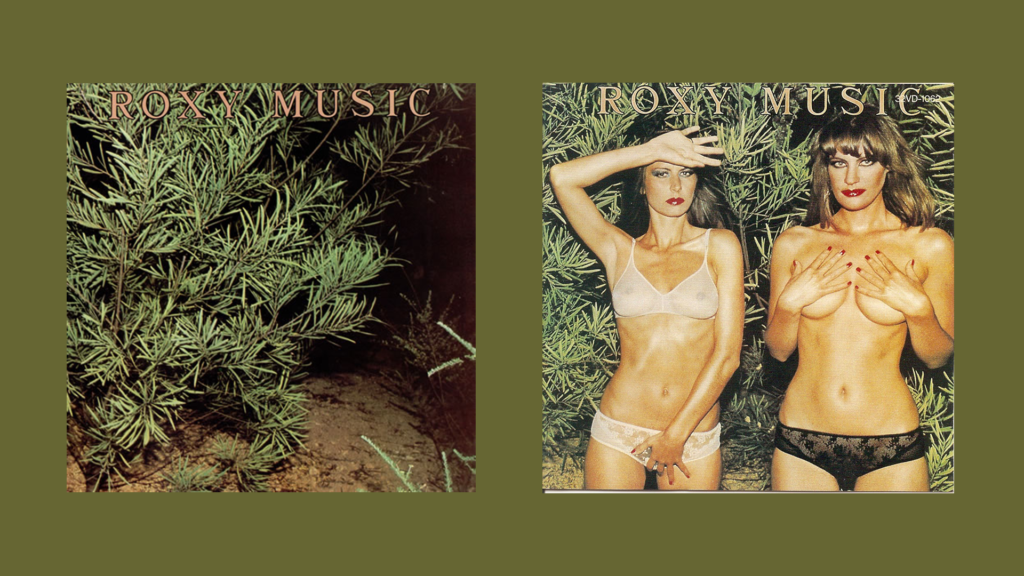 It of course is impossible to avoid the sexiness of the album covers of Roxy music records yet it was absolutely not because of the covers that I or any of my friends bought the records. The combination though of the sexy album covers, Bryan Ferry’s suave demeanor, the unpredictable, interesting, and engaging music made Roxy music stand out as quite unique among all the groups we were listening to.

Here is an article from the guardian that is worth reading: